Pubg mobile Bots are computer controlled players that generally and significantly less skilled then you. Today we will be looking at different ways you can inspect your enemy player is a bot or not. because believe it or not it's pretty easy to do so after you  understand this things.

About the bots of pubg

pubg mobile one of the best battle Royal games for mobile devices and one that is seemingly getting continually better as the days go on.
this is one of the most popular games out right now and there are so many amazing things about this game. but there is one big downside let's face it in pubg mobile there are a lot of bots.

All tips and tricks of Pubg Mobile

thanks anyways if you learn something new today make sure to subscribed for my pubg mobile tips and tricks.

Now let's get into this so do we get in play some simple fact. Every pubg mobile match you go into will have at least some bots there are several reasons. As to why this is the case first off to see many more of these bots in earlier levels , as you rank up higher you still see them but they are less common. This is due to the fact that it earlier levels the developers want  to getting players to have a more comfortable start to the game.

It would be much fine for someone to download and open up a mobile for the first time only to meet a bunch of pros of the game. who will quick scope and kill them at three meters away just for fun.

They wanted to create a buffer for these beginning players having bad computer controlled players allowed people. Who are just starting out and just beginning to learn how to play the game to really test out their weapons and see how they worked.

A beginning player isn't as accurate with the weapons and isn't good at the game having them forced to go up against computer control players. will make them learn and an easy environment the first few matches .

Is actually a pretty good game developer tactic. Having a super hard game, right from the start might turn away some people. They download the game and instantly un install after there first match. Because its too difficult.

Having an easy beginning will let's  people in and get them to stay with the game. If anyone here reading is a game developer, and wants to make anything like Pubg . Maybe use that tactic yourself.

Another big reason why there are bots, is because many players who play this game are extremely impatient. They don't really want to wait minutes at a time to queue up with enough players in a match.

If you noticed regardless, what time of day in play you will instantly get to a server of one hundred people. The only way this is possible is bots. You did not have bots, you have many less people on your servers. And you have to be waiting minutes at a time before all one hundred players show up.

I don't really mind the fact that bots are here, but i honestly would be fine waiting up. to a couple of minutes at a time knowing more players i go up against are actual true players and not computer controlled once .


but anyways, let's move on to the actual topic of today's Article.

Some ways to know is the bot in near you 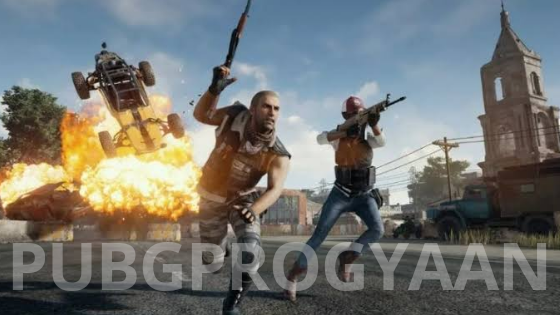 No matter what they will never jump to avoid bullets.I don't know why.
they never run when you see them . They always be walking as they travelling in an open field. Is that they have not figured out what is running yet. There brains not developed to get to that stage, which is pretty bad to be honest. I mean every one knows how to run even regular animals know how to run. So like bots are pretty dumb. May be we can teach them . Domesticate them perhaps. I don't know.

The matter is bots are easily spotted because they were really look like the word bot was taken from. A robot they moving like robots because they are can hate on them and that respect many times you will know when you spot a bot, when they seem to run right past you. Or they run super close to you before they even notice you .

Also Read : How to win close combat in Pubg mobile

For example_ if you're on top of the buildings roof and they are down below directly beneath you. The bots likely program go towards their footsteps show up on the mini map and should just sit there directly beneath you slightly moving left and right every so often pretty much broken because they don't know what to do at that point if they can't see you you basically set up completely clueless. However you know when there's a bot if that clue is player instantly turns and starts shooting at you of the second fraction of your body gets exposed. as a side note it's actually kind a funny especially in a place like military base you can like right prone on top of a roof . And all the bots will run around the court yard confused as long as you have Granates. You can literally kill like five enemies in thirty seconds and they never even know where you were.

Hey let's continue on now . Another way to know is the bot in near you . Is the footsteps sounds really unusual they are consistent . You can hear like 3 steps and then stop and then they take 4 steps and stop . It will drive you crazy because you have no idea were they are. Even though if they coming and get the first shot one you . If you think they will kill you . Then you are totally wrong they have very bad aim  even with the shot gun.


When you shoot on a player what is the player do. Does the player start zig-zaging on the nearest rock or tree over to making a difficult to hit. or does player just turn and start walking in a straight line on one direction looking like they don't have any purpose in life.

Hey how about this when you shoot at some one even if you have see most exposed area ever. Does the other player just prone and not move . Well chances are if the ladder 2 of the 3 happen you probably cross a bot.


After you kill a bot , you can basically confirm it is one . Even in earlier or late game they only have weak guns without many attachments and few ammo and they a very unusual names . Like a 10 years old kid anger problem smashed his keywords that's basically the names were using here. Pretty weird stuffs.


How and were you can find the bots full explained

Now may be you like to find bots because they just add kill quarter for each match. Hey that's OK .
I can help you by explaining about few places were bots are most commonly seen.

It's weird, I actually seen to find more bots later on in the game then right of the beginning . When you're at the start of a match your best bet in finding a bot looking at several different areas.

Either military base or school or even better directly underneath the plane first allows you to drop out or directly beneath where the plane finally kicks you out of the very ends.

I don't really know why they are grouped up at the beginning of the ends. But this ends up happening later on in the game you're always noticed several bots in places at the edge of the running and to get safe and your always see them around air drops it's like as if they're programmed instantly walk towards any airdrop its bonds and on the map.

Here's another tip bots do have the ability to kill one another but just like i said earlier they have really bad aim. if you hear two guys and you think you are in the mids of a battle you may want to run right towards the action. Because you have a good chance of killing most enemies giving you .

No, of course this is always risky as you never really know if one or both of the enemies are bots. But you can probably find this out just by observing how they are firing. Isn't a prolonged gun fight taking a while longer than you thought.

It did what was probably too bots they will never really go full order for a long period of time. Bots for some reason seem to think the longer you wait to fire the more accurate you are.

Will just sit there like five seconds with there M16 and just shoot one bullet on you . Well it is sitting as gonna like what one bullet can not do anything to me but be careful no other bots sneak up behind you here is the thing they are attracted to footsteps and gun fire.

If you shoot one bot and you stay in that same area sooner or later more will pop up be very very careful in that respect and always look around to make sure none come up behind you.

Another a good piece of evidence for the whole bots move towards gun shots argument. Is if you ever stopped and observed bots they baz out to make up brands turns in a direct do not make them look like they have no idea, what their doing it's highly likely there actually instantly turning towards.

wherever that gun shot was because that's probably what they program to do now do i have any solids evidence is this is the case . No but it makes sense in my eyes. so be careful make sure they don't sneak up behind you its pretty depressing and i basically a big slap in the face if you do get snack up on by a bot.


Honestly you never really immune to bots in the mobile no matter what rank i am in this game i always find them. So the basically part of life at this point i don't find a suit to this message  it's just means more kills in a match when i go into i feel like what they should do that is have the ability added in were you can create service and have an option to turn on or off bots i think it would be a great idea.

Thanks for giving us your precious time .

Best of luck for your next victories .